Crude oil prices rebounded 2% on Wednesday amid concerns about fresh Russian sanctions and a tight market condition. WTI is trading above $111 bbl, and Brent is hovering at $117.5 bbl during Wednesday’s APAC mid-day session.

The American Petroleum Institute (API) reported a surprising inventory draw of 4.28 million barrels for the week ending 18th March. This compared to an estimated 25k-barrel-build. In the prior week, API reported a build of 3.75 million barrels while analysts predicted a decline of 1.87 million. US commercial crude inventories stood at 416 million barrels, which is near a three-year low (chart below). Falling stockpiles reflect strong demand for energy as the US economy recovers from the pandemic. This helped to bolster oil prices.

EU and NATO leaders will gather in Brussels on Thursday to discuss further actions to punish Moscow for its invasion of Ukraine. Some EU members said on Tuesday that the bloc should join the US and UK to ban Russian oil and gas imports. This is unlikely to happen in the near term however, as Germany said those imports are critical to the continent’s energy security. About a quarter of Europe’s crude oil and a third of its natural gas supply comes from Russia, underscoring their close energy ties.

Still, further sanctions on Russia will likely derail the diplomatic dialogues between Kyiv and Moscow and undermine their efforts to reach a ceasefire agreement. Re-escalation of geopolitical tensions in Eastern Europe will likely spur investor fears about a prolonged Ukraine war, paving the way for further gains in commodity prices.

Meanwhile, a key Kazakh-Russian oil pipeline may be forced to reduce shipment by as much as 1 million barrels per day for several weeks due to storm damage. The amount is equivalent to around 1 percent of global oil supply. The pipeline disruption put further strain on a global oil market that is facing a severe supply crunch.

Technically, WTIpulled back sharply after hitting a multi-year high last week. Prices have likely entered a deep technical correction as buyers look for profit-taking. An immediate support level can be found at around 94.30 – the 50% Fibonacci extension. Breaking this level exposes the next resistance level of $91.90. The MACD indicator has formed a bearish crossover and trended lower, suggesting that bearish momentum may be dominating. 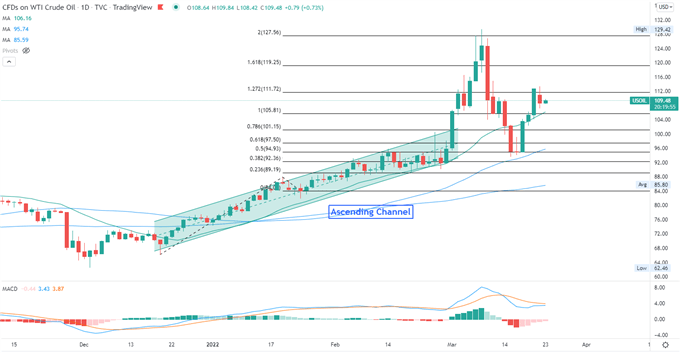