EURGBP’s latest decline traced the lower Bollinger band before unearthing some positive traction from the 0.8300 handle, which is the 61.8% Fibonacci retracement of the up leg from the more than 5½-year low of 0.8202 until the 0.8457 high. The longer-term 100- and 200-period simple moving averages (SMAs) continue to endorse the now one-month neutral trend, while the falling 50-period SMA, is reflecting the recent dominance in bearish forces.

Meanwhile, the short-term oscillators are indicating that bullish forces are strengthening. The MACD, far beneath the zero mark, is flattening below its red trigger line, implying waning in negative impetus. The positively charged stochastic oscillator and the improving RSI together are conveying that upward drive in the pair is intensifying.

Summarizing, EURGBP is exhibiting a broader neutral-to-bearish bias below the SMAs and the 0.8457 and 0.8478 highs. A strong dive beneath the 0.8300 barrier could reignite the fall in the pair towards the lower end of the short-term neutral trading range. That said, the price would need to propel beyond the 0.8416 high to rekindle any convincing odds for a bullish bias to return. 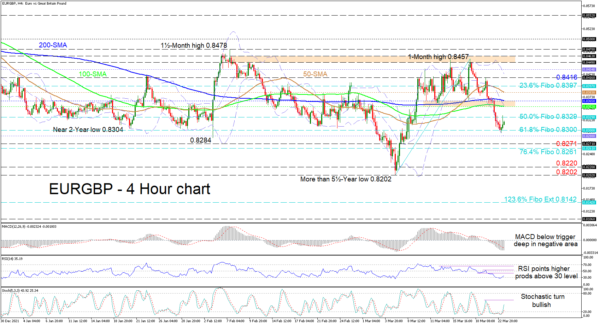