Most read: What is Stock Market Volatility and How to Trade it?

On Wall Street, traders frequently say that the bond market is the smart money because of its predictive power for output growth, inflation, and interest rates – three key variables for the broader economy and therefore for financial assets. Based on this perception, investors sometimes focus sharply on bonds, examining the twists and turns of the yield curve, hoping to glean information about future economic performance and emerging trends. The financial system is highly connected, so it is logical that signals emitted by one market can sometimes become an indicator – perhaps even leading – and a forecasting tool for another that is slower to or inefficient at incorporating new data.

In this article, we’ll look at the Treasury market to explore how the shape/slope of the yield curve can offer clues about expectations for future equity returns and sector leadership by providing insight into the business cycle. Before delving in, it is necessary to become familiar with crucial concepts.

The Treasury yield curve is a graphical representation that plots government bond interest rates across different tenors for the entire maturity spectrum – from overnight to 30 years. It shows the return an investor would earn by lending funds to the US government for a given period of time, with the graph displaying the security’s yield on the vertical axis and borrowing period across the horizontal axis.

The curve may take different shapes, but in healthy environments, it will typically slope upwards as longer-term debt instruments will offer higher returns than short-dated ones to compensate for additional risks such as inflation and duration (see figure below). For example, the 30-year government bond will often have a higher yield than the 10-year note, which in turn, should have a higher yield than the 2-year Treasury note.

Although rare, at times, a long-term security may have a lower yield than a short-term investment, producing a downward sloping term-structure of interest rates. When this occurs, we say the yield curve has inverted.

Frequently, the yield curve tends to invert after the central bank has raised short-term rates to prevent overheating to the point that it is curtailing activity and weighing on the economic outlook. When monetary policy has become too restrictive, investors bet interest rates will have to decline in the future to address a possible downturn and disinflation. These assumptions cause longer dated bond rates to fall below short-term ones, causing the Treasury curve to invert.

Historically, inversions have frequently foreshadowed impending recessions. In fact, in the post WWII era, every yield curve inversion (of the 3-month to 10-year or 3m10y) has been followed by an economic slump.

Rather than focusing on the entire interest rate term structure of the Treasury market, traders will often compare two yields at two specific maturities and refer to their spread, measured in basis points, as “the yield curve”. The most analyzed and frequently referenced curves in financial media are the following: 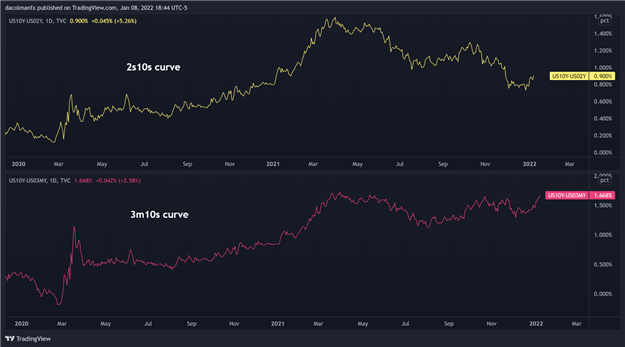 CHANGES IN THE YIELD CURVE

As economic activity, inflation expectations, monetary policy outlook and liquidity conditions change, so will the spread between long and short-term Treasury yields. When the spread increases, the difference between long and short-dated rates widen, and the curve is said to steepen. On the contrary, when the term spread compresses, the yield curve is said to flatten.

The term spread can change for many reasons; for example, it could flatten because long-term yields are declining and/or short-term rates are rising (or a combination of both). The twists and turns of the Treasury curve are an effective real-time business cycle indicator and can therefore help to develop interesting cross-market trading strategies. For instance, sophisticated stock investors will regularly look at the shape and slope of the yield curve to structure an equity portfolio aiming to capture an emerging economic trend.

THE FOUR DIFFERENT SHAPES OF THE CURVE TO KNOW

Here is a summary of the four fundamental yield curve regimes and how they can help predict sector leadership in the equity market.

Related: Stocks Sectors – The Basics You Need to Know

Note: The ‘bull’ and ‘bear’ signifier that describes each regime refers to what happens to bond prices. For example, in bear flattener, when short-term rates rise faster than long-term ones, short-dated Treasuries are being sold, prompting their prices to fall (bearish for price in this example). Keep in mind that bond prices and yields move opposite of each other.

The shape of the U.S. Treasury curve is primarily influenced by inflation expectations, prospects for output growth and the monetary policy outlook. Considering that the yield curve captures important variables about the economy of today and the future, it is a useful leading indicator of the business cycle. Based on this assumption, equity investors often use the shape of the curve as a forecasting device to predict stock market leadership, but this practice shouldn’t be done in isolation as bonds can give false signals as with any tool. That said, top-down and bottom-up analysis are often best served when creating a balanced, diversified and less-volatile portfolio.