The MACD oscillator is strengthening its momentum above its trigger and zero lines, whereas the RSI indicator is sloping slightly down around the 70 level. In trend indicators, the price is holding above the strong 200-day simple moving average (SMA), and the short-term SMAs are moving higher as well.

If the pair overcomes successfully the recent high, it could move towards the 0.7080 resistance taken from the peaks in November 2021. Stepping higher, the price could make a pause between the 0.7175 barrier and the top from October 2021 at 0.7220.

All in all, NZDUSD has been in an ascending movement since January 28, creating higher highs and higher lows. A slide below the rising trendline could switch the short-term bias to negative, shifting attention back to the medium-term downtrend. 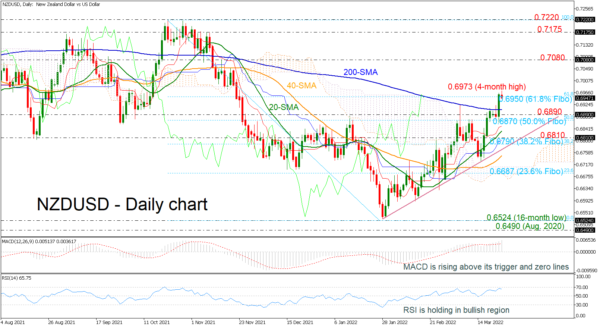