USD/CAD bounces back from a fresh monthly low (1.2565) as it snaps the series of lower highs and lows carried over from last week, but the exchange rate may continue to give back the advance from the yearly low (1.2450) as it trades below the 200-Day SMA (1.2608) for the first time since January.

USD/CAD appeared to be unfazed by the recent comments from Federal Reserve Chairman Jerome Powell as it failed to defend the opening range for March, and the commodity bloc currencies may continue to outperform their major counterparts over the remainder of the month amid the improvement in risk appetite.

The recent decline in USD/CAD coincides with the rally in US equity prices as the Fed seems to be in no rush to unload its balance sheet, and swings in investor confidence may sway the exchange rate ahead of the next FOMC rate decision on May 4 as “the Committee expects to begin reducing its holdings of Treasury securities and agency debt and agency mortgage-backed securities at a coming meeting.”

Meanwhile, the Bank of Canada (BoC) looks poised to deliver another rate hike at its next meeting on April 13 as the “Governing Council expects interest rates will need to rise further,” and it remains to be seen if the central bank will wind down its holding of Government of Canada bonds as Governor Tiff Macklem and Co. plan to “end the reinvestment phase and allow its holdings of Government of Canada bonds to begin to shrink.”

Until then, USD/CAD may continue to give back the advance from the yearly low (1.2450) as it fails to defend the opening range for March, but a further decline in the exchange rate may fuel the recent flip in retail sentiment like the behavior seen during the previous year.

The IG Client Sentiment report shows a whopping 74.43% of traders are currently net-long USD/CAD, with the ratio of traders long to short standing at 2.91 to 1.

The number of traders net-long is 3.92% higher than yesterday and 96.41% higher from last week, while the number of traders net-short is unchanged than yesterday and 34.11% lower from last week. The jump in net-long interest has fueled the tilt in retail sentiment as 65.85% of traders were net-long USD/CAD last week, while the decline in net-short position could be a function of profit-taking behavior as the exchange rate bounces back from a fresh monthly low (1.2565).

With that said, a further pickup in risk appetite may keep USD/CAD snaps the opening range for March to trade below the 200-Day SMA (1.2608) for the first time since January, but the exchange rate may stage a rebound after falling for six consecutive days as it fails to extend the series of lower highs and lows from last week. 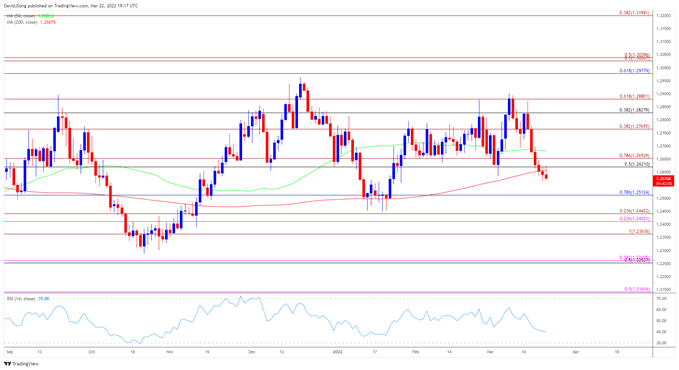