USDJPY stretched Tuesday’s exponential rally to a fresh 6-year high of 121.40 on Wednesday, boosting its gains by 5.2% so far in March.

The market structure is strongly bullish, underpinned by the upward sloping simple moving averages (SMAs). Yet, with the price trading way above its SMAs and the RSI approaching its 2016 high after deviating significantly above its 70 overbought level, there is growing speculation that the bulls could soon run out of fuel. The Stochastics are in line with this narrative as the blue %K and red %D lines are set for another bearish crossover above their 80 overbought level, which is lower than the one registered last week.

If the bulls surrender around 121.55, the pair may drift lower to seek support near Tuesday’s low of 119.42. Failing to rebound here could see an extension towards 118.36, while a steeper decline may test the broken resistance line currently at 117.80. Should sellers breach the 20-day SMA at 117.36 as well, the downfall could pick up steam towards January’s top of 116.33.

Summarizing, USDJPY continues to hold a bullish bias, but with the pair trading within the overbought zone for a week now, conviction is growing that the impressive rally could soon take a breather. 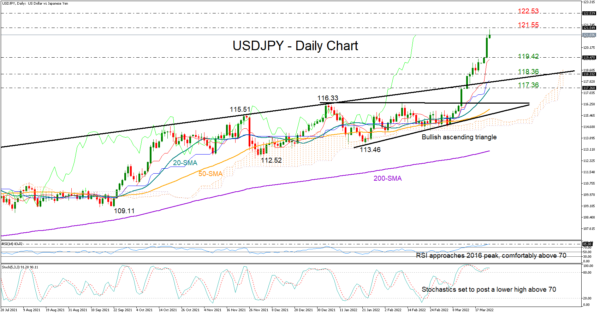