The Nasdaq 100 index pulled back on Wednesday as investors weighed geopolitical uncertainties surrounding the Ukraine war and tightening monetary policy. Several Fed officials pointed to 50bps rate hikes down the road as the central bank attempts to contain the highest inflation in 40 years amid rising commodity prices. Crude oil prices finished at a two-week high of $115 as traders mulled further sanctions on Russia by world powers.

EU and NATO leadersare gathering in Brussels today to discuss further actions to punish Moscow for its invasion of Ukraine. Some EU members suggested on Tuesday that the bloc should join the US and UK to ban Russian oil and gas imports. This is unlikely to happen in the near term however, as Germany said those imports are critical to the continent’s energy security. About a quarter of Europe’s crude oil and a third of its natural gas supply comes from Russia, underscoring their close energy ties.

Still, further sanctions on Russia will likely derail the diplomatic dialogues between Kyiv and Moscow and undermine their efforts to reach a ceasefire agreement. Re-escalation of geopolitical tensions in Eastern Europe will likely spur investor fears about a prolonged Ukraine war, paving the way for further gains in commodity prices. This may translate into higher inflation and urge central banks around the world to take a more aggressive approach to tighten monetary policy.

Japanese stocks rallied 3% on Wednesday, extending a six-day gain. This renders the market vulnerable to profit taking amid “risk off” sentiment. The Nikkei 225 index soared to a two-month high of 28,040, thanks to a weakening Yen that makes Japanese exports more competitive in global markets. Japan has fully lifted the Covid quasi-emergency measures in 18 prefectures, allowing business activity to normalize in most parts of the country. SoftBank soared 8% on Wednesday as Alibaba – one of its major holdings – rallied 6.7%. Another heavyweight blue chip Fast Retailing –Uniqlo operator – gained almost 4%.

Hong Kong’s Hang Seng Index (HSI) soared 20% since Chinese authorities pledged to support the economy and stabilize the capital market with more favorable measures. Technology stocks such as Alibaba (+6.7%), Bilibili (+10.1%), Kuaishou (+6.3%) and Meituan (+2.09%) were among the best performers yesterday. A rally in this magnitude may entice some profit-taking activity in the near term, but medium-term outlook has likely turned positive as policymakers’ attitude towards platform companies “U-turned”.

Asia-Pacific stock markets look set to open mixed on Thursday. Futures in Japan, Australia, Hong Kong, Taiwan, Singapore, Malaysia, India and Thailand are in the red, whereas those in mainland China, South Korea and Indonesia are in the green.

Looking ahead, the extraordinary NATO summit dominates the economic docket alongside the US durable goods and US Markit manufacturing PMI reading. Find out more from the DailyFX calendar. 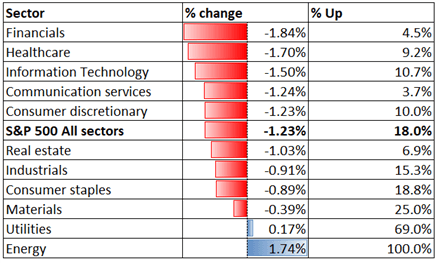 The Nasdaq 100 index breached above the ceiling of a “Descending Channel” as highlighted on the chart below. This may signal a bullish trend reversal. An immediate support level can be found at 14,160 – the 127.2% Fibonacci extension. The MACD indicator has formed a bullish crossover and trended higher, suggesting that buying pressure may be building. 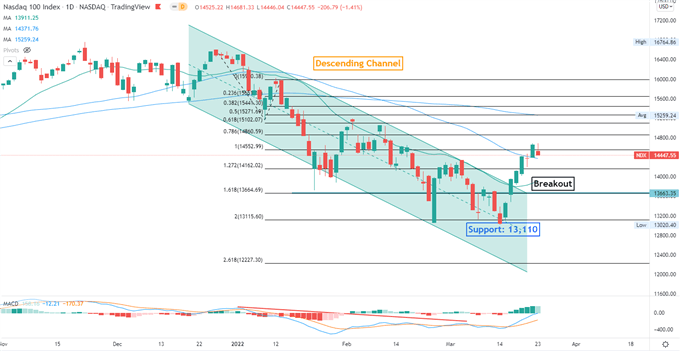 The Nikkei 225 index has likely breached above the ceiling of a “Descending Channel” as highlighted on the chart below. This move has intensified near-term buying pressure and open the door for further gains. An immediate resistance level can be found at around 28,240 – the 50% Fibonacci extension. Several long bullish candlesticks underscore bullish momentum, paving the way for further gains. The MACD indicator formed a bullish crossover and trended higher, suggesting that bullish momentum is dominating. 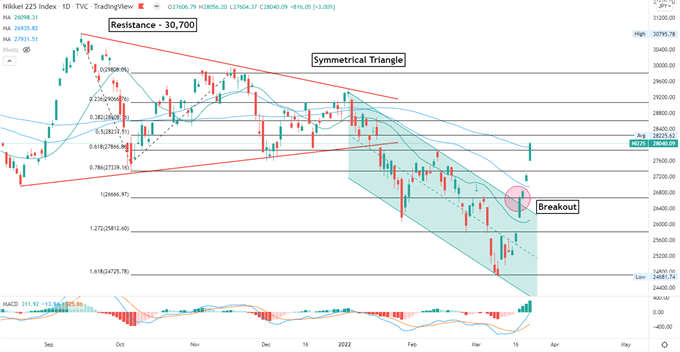 The ASX 200 index is breached above a key resistance level of 7,290 and thus opened the door for further upside potential. The next resistance level can be found at around 7,435 – the 78.6% Fibonacci retracement. The MACD indicator pierced through the neutral midpoint and trended higher, suggesting that bullish momentum is dominating. 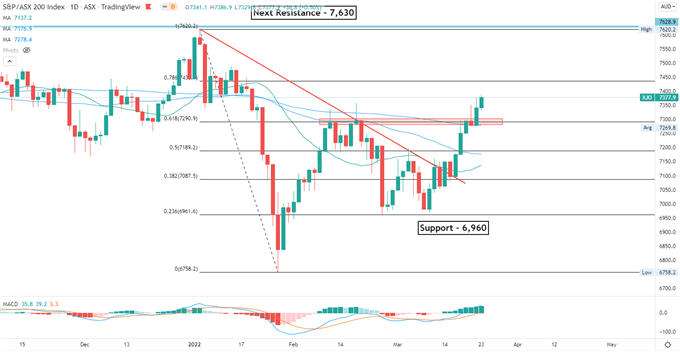