GBPJPY Eases from 6-Year High; Rally May be Losing Steam

GBPJPY reached a fresh six-year high of 161.48 earlier today but the price has now pulled back to around 160.75. The pair has risen sharply from the two-month trough of 150.97 plumbed on March 8. However, the momentum indicators suggest the latest upswing is cooling.

Both the RSI and the stochastic oscillator have entered overbought territory, warning that a near-term correction is due. The stochastics have been holding above 80 for more than a week now, while the RSI, which only crossed above 70 a few days ago, is pointing down. Nevertheless, the indicators have held in their respective overbought zones for longer durations in the past so a big downwards reversal may not be a foregone conclusion.

The price is currently trying to establish a foothold at the 138.2% Fibonacci extension of the February-March downleg at 160.76. Should it fail to do, so, the 123.6% Fibonacci of 159.73 is the next line of defence that could prevent a steeper correction. Otherwise, the pair would probably slip back towards the February peak of 158.05, restoring the neutral longer-term trend. Even lower, the 61.8% Fibonacci retracement of 155.35, where the 50-day moving average is also converging, is the next critical support that needs to be watched as slipping below this area would intensify the downside risks.

However, if today’s slide proves to be a temporary blip, GBPJPY could turn its sights to the 161.8% Fibonacci extension of 162.43. Breaking above this level would bring the 165.0 handle into scope. Moreover, the medium-term picture would start to look more convincingly bullish.

To sum up, the positive short-term bias is in danger of fading and turning negative, while in the broader outlook, the rally has some way to go still before a clear bullish structure is formed. 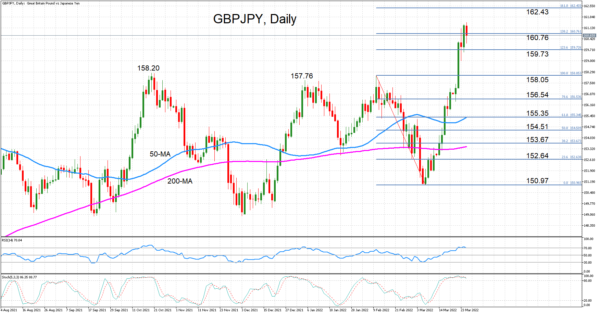 Asia FX shrugs off hawkish Fedspeak, China in focus By

Asia FX shrugs off hawkish Fedspeak, China in focus By